The Fifth International Ancient Drama Workshop will be held from 14 to 29 July 2022 at the European Cultural Centre of Delphi.The workshop will be run by the director Thanos Papakonstantinou in collaboration with Konstantina Angelopoulou (vocal training) and Candy Carra (physical training).

The workshop is intended for young theatre professionals from Greece and abroad, including actors, directors, set designers, costume designers, choreographers and theatre creatives in general who want to focus on and deepen their study of ancient drama, giving themselves a practical grounding in the subject.The objective of the workshop is the dissemination and study of ancient drama, offering specialised knowledge to theatre professionals, but also strengthening the global dialogue and conversation about ancient drama and how it is understood and approached in practice nowadays.

The workshop was established on an annual basis in 2016 and is run under the auspices and with the support of the Ministry of Culture and Sport. It is part of the ministry’s Ancient Drama Network.

PROPHETIC DISCOURSE
Over the centuries, the figure of the prophet has been associated with spiritual experiences.The prophet is divinely inspired, seeing, hearing and ultimately experiencing something that does not exist for other people. He is in direct contact with a higher power which speaks to him in a strange voice, with incomprehensible words, and forces him into apparently strange and irrational acts.The prophet moves away from his or her usual behaviour: they are overtaken by a mania.

Taking prophetic discourse as the central pillar of the workshop, as an open field of dramatic material, with the figure of Cassandra as a starting point, the aim of the workshop will be to approach the performance of mania, individually and collectively, through intensive physical and vocal training.

The aim, through research and a process of learning together, is to create and present an event: a procession through the archaeological sites of Delphi that will transform and evolve into a choral ode of ecstatic prophecy.

The workshop will be conducted in Greek and English. Knowledge of English is also essential for Greek participants.

€450.Tuition, transportation from Athens to Delphi, accommodation in the guesthouse of the European Cultural Centre of Delphi, breakfast and lunch.

Anyone interested in participating should send their CV and a photograph by 10 June 2022 to cv@n-t.gr with “Fifth International Ancient Drama Workshop” in the subject line.

Participants will be selected on the basis of their CVs and may be interviewed. For further information and the CVs of the instructors, visit the National Theatre of Greece website www.n-t.gr

The workshop is run by the National Theatre of Greece and the European Cultural Centre of Delphi under the auspices and with the support of the Ministry of Culture and Sport.

The National Theatre of Greece International Ancient Drama Workshop is a member of the International Ancient Drama Network created, coordinated and financed by the Ministry of Culture and Sports, with the aim of educating people working in the theatre at different levels and categories about ancient drama, familiarising the general public with the genre, and developing the conditions under which theatre people from different countries can work together.

CANDY KARRA
Dancer, performer, facilitator, and educator. She has graduated from the “Niki Kontaxaki” Higher Professional School of Dance and holds a BA in Pedagogical Studies from the Kapodistriako National University of Athens, both with distinction. In 2012 she was invited to participate in Ultima Vez’s first monthly and intensive research program on theater and dance in Brussels and in 2016, in the EUROPOLY - masterclass for young artists at the Kammerspiele in Munich. She is currently doing her MFA in MET - Athens School of Fine Arts.
Alternating her working roles, over the past ten years she creates and performs in collaboration with various choreographers and dance companies, participating in festivals in Greece, Cyprus, Germany, Spain and New York (Athens & Epidaurus Festival, Kalamata International Dance Festival, Dancing Athens Festival of Onassis Cultural Center, Metamorphosis and Nostos Summer Festival of Stavros Niarchos Foundation, Arc For Dance Festival, In Progress festival at KINITIRAS residency center, Akropoditi DanceFest, Athens Video Dance Project festival, Kypria International Festival, Folkwang Physical Theater Festival at Essen – Germany, pad - Performance Art Depot at Mainz – Germany, MASDANZA at Mas Palomas and Tenerife - Canary Islands, Figueres es Mou – Spain, Battery Dance Festival - New York and others.). She regularly teaches dance and facilitates educational programs based on improvisation and a dialog between different art forms in collaboration with the Onassis Stegi, Cavafy Archive, and the cross-cultural organization Polyphonica, among others, while she is part-time faculty of Deree - The American College of Greece since 2016. In 2020 she co-choreographed and performed the piece “manoeuvre_” which premiered in the 7th New Choreographers Festival of Onassis Stegi and was afterwards presented at in Miniature of Akropoditi Dance & Performing Arts Centre, the accessible Synama Festival #1 of Liminal Access Force and MPArt, 8th Mill of Performing Arts with the support of Onassis Stegi. She has worked as a choreographer for theater performances of the directors Thanos Papakonstantinou, Kostas Papakonstantinou and Katerina Giannopoulou. 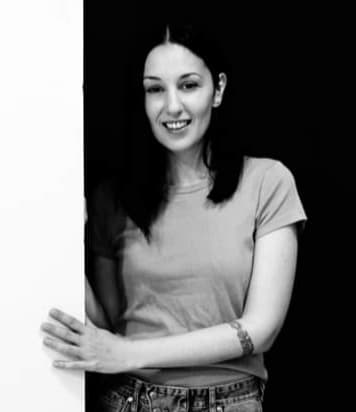 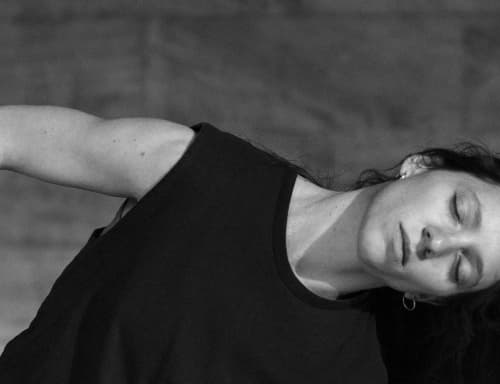