The National Theatre of Greece is joining forces with DAWA festival, a group of over 30 Shanghai-based cultural partners and institutions from Europe, China and the world, presenting you “Diverse As We Are” – International Festival of Inclusive Culture (DAWA), the first international festival of its kind in China scheduled to take place in Shanghai from 15 to 25 September, 2022.

DAWA shares the values of diversity, inclusion, accessibility, sustainability and equity. The festival’s goal is to combat stereotypes, remove barriers, raise awareness around disabilities, and foster the understanding of diversity and inclusion as an integral part of society.

The National Theatre of Greece is participating in two events:

Loxandra Lucas is the first person with Down Syndrome to work as an actress at the National Theatre of Greece. Loxandra played the role of the Child in Fuenteovejuna by Spanish playwright Lope de Vega, in a performance directed by Eleni Efthymiou. The production was part of the National Theatre’s 2021-2022 season and was staged at the Central Stage of the famous Ziller Building.

This mini-documentary directed by Patroklos Skafidas traces all the crucial moments and decisions that made Loxandra’s dream come true: how director Eleni Efthymiou chose her for the role, how Loxandra and her family first responded, the challenges and the multiple gains from such an exciting encounter both for Loxandra and the National Theatre of Greece.

In July 2017 the Young People’s Stage of The National Theatre of Greece launched the project “Theatre in Greek”, an intensive drama workshop which used drama as a tool for learning Greek as a foreign language.

At the workshop – under the guidance of Mrs Sofia Vienopoulou, director and head of the Young Peoples' Stage – participated 20 refugees - aged 14-19, coming from Open Accommodation structures (domes) and Transit Accommodation Facilities for Unaccompanied Minors, 5 Greek teenagers – participants of past workshops – and a group of 10 actors of the National Theatre’s troupe. The uniting force of this intercultural group was the belief that theatre can truly transform people’s lives.

During the workshop were presented eight short episodes of a child’s journey, from its country torn by war to some safe place in Europe. A journey from the dangerous known to the secure unknown; a journey from childhood to adulthood. This journey was brought to life through the participant’s stories, memories, nightmares and fairytales. The outcome affirmed the power of theatre to ward off fear.

Art isn’t always beautiful neither is truth. Therefore, we explored theatre’s beauty in its tools rather than in its content. Our aim was to get to know each other through our stories, to truly look in each other’s eyes and touch one another, in order to truly be able to share. Only when we free ourselves from prejudices do we manage to endure loss, fragility, solitude, shame and death itself. 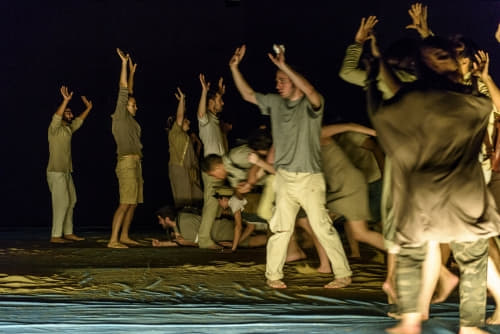